St Joseph’s Primary School opened on 11 February 1958 with 73 pupils. It was on 10 March of that year that St Joseph’s School was officially blessed and opened by His Grace, Sir Guilford Young. 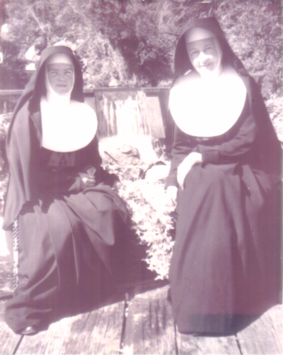 The first teachers were Sisters of St Joseph. Sister Mary Joan McHugh and Sister Mary Chanel Burt, took classes in a modern two-storey building, which consisted of three classrooms on the ground floor and the convent on the first floor.

In 1963 two more classrooms were built to meet the needs of an expanding population. This extension was built by voluntary labour organized by Father Tom Bresnehan. The area around the buildings was cemented again using voluntary labour. Parents worked together to complete this task, often using headlights of cars to provide more ‘daylight’.

In 1976, the Sisters of St Joseph withdrew from St Fursaeus’ School in Zeehan. It was decided that the children from Grades Three to Six would travel by bus to St Joseph’s in Rosebery. As the classrooms were inadequate, a two classroom demountable building was acquired.

Increased enrolment allowed, in 1978, single stream classes for the first time. More teachers were needed and facilities for staff, administration and three new classrooms were provided as another demountable building was purchased.

By 1983 St Furaeus’ School in Zeehan had become a one-teacher school, consequently employing a Principal became difficult. As a consequence, St Fursaeus’ became a sub-school of St Joseph’s Rosebery.

In 1983 a playground was built in memory of Mr John Druett who had had a long standing association with the St Joseph’s Parents and Friends Association, the School Board of Management and the Parish Council.

In 1991 the four main towns on the West Coast—Queenstown, Strahan, Zeehan and Rosebery—became one parish under one Parish Priest whose residence is in Queenstown.

The first lay Principal was appointed to St Joseph’s School towards the end of 1993 and in 1994, the Sisters of St Joseph left Rosebery. They were to return again in 1997 taking up the roles of Principal and Religious Education Co-ordinator.

In 1995 MacKillop Hall was constructed with voluntary labour to keep the costs low. The hall was opened by Sister Carmel Jones SSJ. It is an ideal shelter for children on wet and cold days, and also provides warm and adequate space for Physical Education lessons.

At the end of 1999, at the close of the century, the Sisters of St Joseph once again left St Joseph’s and the school was again administered by a lay Principal.

The history of St Joseph’s School continues and took an exciting turn in 2005 when a four stage Capital Development Project was approved for the School. Stage One/Two, comprising a new administration and concourse area, an open-sided undercover play/utility area, and a refurbished Library and storeroom was completed in January 2007. Stage Three, comprising a general purpose learning areas with adjacent covered concourse areas, was completed November, 2008.

St Joseph’s Golden Jubilee on 11 February 2008 was celebrated in style during April of that year. The celebration was attended by past and present staff and students, including many of the Sisters of St Joseph. Mass was celebrated by Archbishop Adrian Doyle, West Coast Parish Priest, Fr John Girdauskas and Fr Flannery, who first commissioned the building of St Joseph’s School in Rosebery.

April 2010 saw the completion of the Capital Development Project with two modern classrooms and a dedicated Kindergarten classroom with its own play area and outdoor equipment and modernisation of Information Technology added to our already extensive redevelopment. Stage Four of our building project was completed through the generous support of the Federal Government through the Building the Education Revolution (BER) funding.

St Joseph’s celebrates our state of the art classrooms and learning areas. St Joseph’s School exemplifies the very best in modern design and use of technology in enhancing our children’s learning.

At the beginning of 2010 extensive renovation of our church was finalised. Internal plaster walls were replaced and painted, sections of the outside walls were repaired and also repainted while the Church Cross was replaced. Heating was also improved. These renovations greatly enhanced the look and atmosphere within the church. The School is very proud that our Parish Church stands in the middle of our School both physically and also providing an important and significant religious dimension to our School.

Stage Five saw additions to the School hall and eating area enhancing these two areas. Two toilets built near the hall helped alleviate the need for children to move unsupervised through the School at recess and lunch time. Internally the two concourses were significantly improved while other areas such as stairs were redesigned to provide greater safety to students.

The play area containing the play equipment has been significantly improved with the removal of the present pine chip soft fill and replaced with artificial grass (2016). The start of 2017 saw the church roof repaired and painted finalising a remarkable total redevelopment of St Joseph’s.

St Joseph’s honours those who have forged such a wonderful School and looks forward to many more years of dedicated service in supporting the educational needs of the young children in the Tullah, Rosebery and Zeehan areas.

And so St Joseph’s continues as a landmark in Rosebery,

a place where love abounds,

a place where each individual is valued

and a place where God can be found.

We hope you all enjoy the new website and any feedback will be much appreciated.